The Baptist Press is reporting that 40% of Baylor University faculty up for tenure this semester have been denied:

An unusually high number of faculty members at Baylor University have been denied tenure this semester, and one former Baylor professor believes the denials reflect the school's decision to turn away from its Baylor 2012 campaign to establish Baylor as both a Christian university and a top-tier research institution.

The former Baylor prof who thinks the university may be rejecting its Biblical heritage for a bowl of secular soup is William Dembski. Dembski is a senior fellow at the Discovery Institute and a professor at Southwestern Baptist Theological Seminary in Fort Worth.

As Dembski sees it, "All the junior faculty denied tenure appear to have strongly supported enhancing Baylor's Christian identity, an aspect of Baylor 2012 that many of the established professors at Baylor reject, preferring instead that Baylor become secular."

"This scandal is terrible news for Baylor and the wider Baptist world," Dembski says. "It indicates that Baylor's vision for restoring its Christian identity is on the way out and sends a message to top young scholars not to come to Baylor, because whether you get tenure is based not on merit or Christian commitment but on the whim of a capricious president."

But even as March doubts about Baylor's intellectual and Biblical commitment surface, a February press release from Philadelphia Biblical University (PBU) demonstrates an alternative for thinking Christians.

Newly inaugurated PBU president Dr. Todd Williams "Seeks to Establish Model for a Biblical University" even if that means causing a "positive disruption" to the status quo.

"We must have the fortitude and diligence to cut a new path through the landscape of contemporary higher education . . . to define and establish this model of a biblical university and thereby create a positive disruption in the academy," said the new PBU president in his Inaugural Address.

"We must engage more effectively the broader evangelical and academic communities. . . . Like the apostle Paul on Mars Hill, we must enter the marketplace, and the marketplace of ideas, and speak. If our goal is to elevate the profile of the University -- and it is -- then we must elevate our level of participation."

One indicator of the school's positive direction is that it brought aboard author and thinker (and wife) Nancy Pearcey as professor of worldview studies (she's also a fellow at Discovery). Here's the PBU press statement announcing Nancy's appointment.

Who's Worse? Son of Schaeffer or Obama Pastor?

In case this is your question: Who's worse, Frank Schaeffer or Obama's pastor Rev. Wright?

Or is this question unfair and totally misplaced?

The younger Schaeffer's columns at the Huffington Post are here. More on Rev. Wright here.

Schaeffer son Frank says, yes, according to this report in WorldNetDaily.

"When Sen. Obama’s preacher thundered about racism and injustice, Obama suffered smear-by-association," writes the younger Schaeffer. "But when my late father -- religious right leader Francis Schaeffer denounced America and even called for the violent overthrow of the U.S. government, he was invited to lunch with presidents Ford, Reagan and Bush Sr."

Finally, light a candle: Buy the Complete Works or other great books or videos by Francis Schaeffer.

Black Jesus Does Not Exist

Barack Obama says he is "proud of my Christianity," and that he appreciates his spiritual mentor, the Rev. Jeremiah Wright. For one thing, says Obama, the reverend introduced him to Jesus Christ.

One does not doubt the sincerity of Obama's feelings. But which Jesus is he talking about?

Rev. Wright preaches that Jesus was a "poor black" man. And yet if we go by the data of the Biblical record, the historical Christ is nothing of the sort.

Poor? As the Son of the Living God, Jesus of Nazareth had and has untold wealth at his fingertips. That he chose not to avail himself of these vast riches says more about his sacrificial mission than about the political implications of his earthly bank account.

In fact, Jesus of Nazareth was and is rich beyond measure. And yet this same Jesus was no sellout to economic greed. Nor to economic guilt. He was not captured by class warfare or by any impulse that smacks of Karl Marx.

But what about a "Black" Jesus? Well, being Jewish, it seems a little more likely that his skin color was olive. Genetics and all that.

But maybe Jesus was "black" culturally, standing in for the weak, the pure and poverty-stricken, the oppressed, the "scum of the earth" who in fact are the apple of God's eye.

I'm not so sure. His message is that moral failure is an equal opportunity society. Or, as Paul put it in an "obscure" verse in the book of Romans, "All have sinned and fallen short of the glory of God."

Demagogues and race hustlers black or white may be offended by what follows, but this "all" includes rich man, poor man, oppressor and oppressed, Jew, Greek, Gentile, American, and African. Just look in the mirror.

The historical Jesus transcends religion, elections, and personal theologies. He stands as an objective phenomenon before all humanity and all subjective "faiths," unshackled by the dictates of group identity, race politics, liberation theologies, church cultures, and class warfare.

It is true: Power elites will "employ malleable symbols of religion and politics to manipulate money and masses towards results that overturn the original content of words and action rooted in history" (more).

But we don't have to play along. We can resist the myth. We can shock the world and say out loud: Jesus of Nazareth is the biological son of Mary, the adopted son of Joseph, the begotten Son of God, born of a virgin, verified in history, the King of Kings, and the Lord of Lords.

This Jesus is no victim, he needs no liberation, and it is the height of idolatry to try to reduce him and those who trust him to pigmentation, class, race, or any other kind of category that excuses the worship of the creature instead of the Creator.

I wouldn't blame Mr. Obama if he wanted a reintroduction. 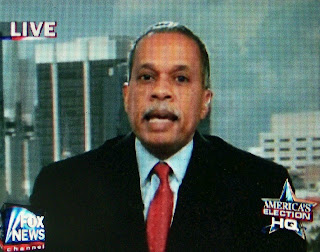 Juan Williams reviews what Obama did and didn't do in today's speech (video): "I think he had to take responsibility . . . that's what he didn't do."

It's a question that goes to Obama's "judgment and character."

Fox: "Is the damage done and that's it?" 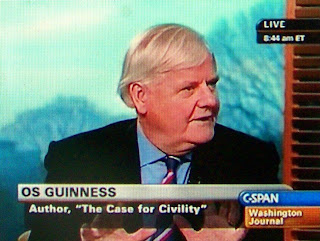 Speaking of the Bible, prostitutes, and the NY Governor, Cal Thomas asks:

"Shouldn't there be a law against the injured wife appearing with her husband at these media events?"

But if the humiliated wife is expected to show up, let us ask: Why not the children? That, at least, might have a positive impact on Dad in the days that come.

Seeing pain and injury in their downcast eyes might remind a hard-charging father and governor of who he is supposed to be.

Being a father is more important than being a governor.

If he forgets that, not much else is worth remembering.

Now that we know the name of the organization -- Emperors Club -- I hope the investigation broadens (pardon the choice of words) to see who else has poor judgment and probably shouldn't be in power.

Free Thought on Darwin at Union-Tribune

There's an uncivilized outbreak of intellectual freedom re Darwin over at the San Diego Union-Tribune.

A guy with two science degrees has a column explaining why "Darwinists confidently assert there is no controversy over evolution: They actively shut down such scientific debates from taking place."

Nice work, if you can get it funded.

Clearly, this fellow is a danger to the public peace, secular agenda, last Saturday's living Constitution, and the post-American way.

Union-Trib editors ought to be praised. But are they ready for the 3 a.m. materialist knock at the door?

I had been a Christian only a few months in summer 1971, so I knew nothing about the young man a few feet away plucking his guitar except that his name was Larry Norman.

Tall, lanky, with sweeping blond hair, Norman was in town for a concert and had dropped by the Christian commune where I was staying. No one had invited him.

Apparently he had learned via the grapevine that our little household, known as His House, was the gathering place for Jesus Freaks in Albuquerque.

Only a few of us were in that night, so we sat comfortably on the floor quietly talking, praying, and singing in the soft lamp light.

Norman played a few of his trademark songs like “I Wish We’d All Been Ready” and “We Need a Whole Lot More of Jesus (and a Lot Less Rock and Roll).”

Larry Norman went on to be hailed as the founder of Christian Rock Music (and the owners of His House, Denis and Margie Haack, went on to found a ministry called Ransom Fellowship).

Norman defended his work as a musician by invoking a basic Christian worldview principle: “I think everybody should be a full time Christian, even if they work on cars or sell insurance” (quoted in American Jesus: How the Son of God Became a National Icon).

When Norman died last Sunday, the obits began pouring in. Here are some links:

Examiner.com: Tribute to the Empyreal Buckley

WASHINGTON -- "In St. Louis in the late 1970s, my wife Nancy and I were students at Covenant Seminary. Nancy was still in her 'feminist' stage, and when a fellow student gave her a copy of William F. Buckley Jr.'s magazine National Review as a source for a paper she was writing, she was too embarrassed to be seen carrying such a 'reactionary' publication. She hid it among her school papers. . . ."

To see the entire commentary at the Examiner, go here.

Novelist and son Christopher Buckley: Father died "with his boots on."

The links below contain facts and may suggest a few whys and wherefores:

Meanwhile, a passage from this February 28 tribute to William F. Buckley seems apropos. Regarding Buckley:

"In several respects one is reminded of Francis Schaeffer and C.S. Lewis -- deep, quick, sharp, but also humane in their brilliance, also caring for the human being next door, also real people doing real work. The contrast with the opportunistic 'mover and shaker' of Big Government, Big Celebrity, or, sadly, Big Christianity, encourages us to push forward to a higher calling,
a nobler practice, a loving dream awalk in the world."

Here are two dreams -- doable, humane, inspired by God: 1) Real work by real people, 2) Market the truth truthfully. Trot them out at the next big meeting of marketers, publishers, ghosters, blurbers, fundraisers, and other affiliates of Big Name, Inc. Then duck.