The Bible, the Africans, and the Slave Ship 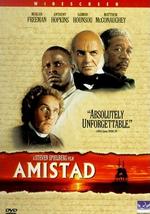 Church-state separationists and other secular heirs of the Enlightenment tell us that Christianity is a matter of private faith best practiced by consenting adults in the privacy of their homes, churches, and prayer closets.

The best option among these, some say, is the prayer closet, for by limiting the free exercise of religion to this spiritual Liechtenstein, innocent children will be less subject to infection by a far-from-harmless myth. Planned Parenthood and the ACLU assure us that other kinds of collateral damage will be minimized as well.

The real myth, however, is the naturalistic myth that humanity lifted itself miraculously out of absolute nothingness into somethingness into consciousness by chance, law, dumb luck, and -- well, anything but the Creator that the Declaration of Independence talks about. That's way too scary, uncomfortable, and it interferes with Spring Break.

Happily for a bunch of black African slaves on the Amistad, the secular memo proclaiming the pretended autonomy of human beings from their true Creator never boarded ship. For the benefit of these people made in the image of God and not in the image of cosmic mudslop, the Bible and its verifiable information about God, man, the cosmos, what went wrong, and how to fix it, got there first.

* 160 Years Ago: "A prominent Massachusetts politician, former President John Quincy Adams, played a role in black history by persuading the US Supreme Court to free a group of African captives who had staged a mutiny on the slave ship Amistad."

* So Tomorrow: When governor-elect "Deval Patrick takes his place in the history books as the state's first African-American governor, he will offer a symbolic nod to that storied past, taking the oath of office on a leather-bound Bible given by the freed captives to the former president."

* You Must Be Kidding: On the contrary, "This Bible is a quintessential American symbol, one of democracy, and the inner workings of freedom, and our system of laws, and the abolitionist movement, and it represents a real victory for Africans who stood up for themselves." -- Beverly A. Morgan-Welch, Executive Director, Museum of African American History, and a "cochair of Patrick's inauguration committee"

* The Bible & Freedom: "The Bible was given to Adams by these freed African men because they so appreciated that Adams was not just their legal advocate, but he believed in their freedom."

* Precious Book: "On an inside page, the Mendi men wrote a note of thanks to Adams, saying the Bible 'has been a precious book to us in prison, and we love to read it now we are free.'

* Out of the Prayer Closet, Out of Slavery: "Adams sent the men a letter back, saying, 'It was from that book that I learnt to espouse your cause when you were in trouble.'"

Final note: It's also from that book that the Founders learned their major lessons on how to start a country. And when -- very sadly -- the Founding generation inconsistently failed to allow all people, regardless of skin color, to express their birthright of freedom under Heaven, history judged them.

This is what happens when people walk away from the Creator's "DNA for human freedom," as it were. Clearly, it could happen again. It could happen if politicians regard that "precious" book as merely a symbol, a religious prop on the political stage. A text by which to be inspired, to move an audience, a constituency, raise funds, but also a content to be ignored at vital points.

Materialists may differ, racists may protest, and co-opted religionists may squirm. But Man is not a piece of meat to be manipulated and bought and sold and stuck in closets. The Bible unbound confirms what human beings experience moment by moment: We live in a moral universe.

"Bible With Ties to Slave Ship Will Be Used for Oath" appears here in the Boston Globe.

Related Article:
America Was Meant to Be Free, Not Secular