Forum: The Sundance/Bestiality Debate -- Life, Liberty, and the Pursuit of Horses?

"Zoo is a documentary about what director Robinson Devor accurately characterizes as 'the last taboo, on the boundary of something comprehensible,'" writes Kenneth Turran. "But remarkably, an elegant, eerily lyrical film has resulted." Turran's article is here.

In contrast, attorney Seth Cooper writes in American Thinker: "Sooner or later the Living Constitution will meet bestiality. The sex-with-animals crowd as alternative lifestyle is on display in a film which just premiered at the Sundance Festival. The 'internet-based zoophile community' portrayed in the film is not sensationalized or condemned according to the account Kenneth Turan of the Los Angeles Times.

"I have not seen the movie, but I have seen modern jurisprudence, which is beginning to show preliminary signs of extending its embrace of relativism to interspecies sex." Read Cooper's article here.

Question: What you think of Zoo and the issues it raises? Do we have before us "an elegant, eerily lyrical film," or the extension of relativist thinking to "interspecies sex"? Share your thoughts. 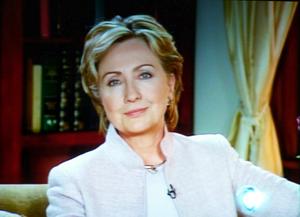 Bill Clinton won the presidency, which means Hillary can too.

"Fund-raisers on the left and right are salivating now that Sen. Hillary Clinton has declared, 'I'm in' the 2008 presidential race," writes columnist Cal Thomas. "On the left, feminists will likely hail her as the reincarnation of suffragette Susan B. Anthony. On the right, conservatives will portray her as a cross between Lady Macbeth and Bonnie Parker."

* Attacks Didn't Stop Bill: "Conservatives should be careful. The nonstop attacks on Bill Clinton did not keep him from winning in 1992, nor did his personal scandals prevent his re-election four years later." . . .

* Double Standard: "Men can't run against a woman the way they run against other men. Former Republican Congressman Rick Lazio learned the double standard voters apply to a female candidate. . . . "

* Surge: "Some conservative Web sites are already claiming Sen. Clinton will unite the Republican base like no other Democratic candidate. Maybe, but that base is too small to counter what surely will be a surge in female voters." . . .

* Not-Bill Factor: "A major advantage for Republicans is that Hillary is not her husband. She is aloof and calculating . . . ."

* The Machine: "The Clintons have a well-oiled political machine that neutralizes people who get in the way of their pursuit of wealth and power." . . .

* The Focus: "Should not be on gender or any other side issue, but on who is best qualified to defend the country against its many enemies, foreign and domestic. Look for the dirtiest, meanest and most costly presidential campaign in history in pursuit of the answer."