Blitzer Question to VP Cheney About Daughter Out of Line?

Matt Drudge has reported that Vice President Dick Cheney "responded sharply" to CNN anchor Wolf Blitzer's line of questioning regarding the pregnancy of the VP's lesbian daughter, during an interview taped for today's "Situation Room."

Here's part of the dialogue, according to Drudge:

Blitzer: "Your daughter Mary, she's pregnant. All of us are happy. She's going to have a baby. You're going to have another grandchild. Some of the -- some critics, though, are suggesting, for example, a statement from someone representing Focus on the Family: 'Mary Cheney's pregnancy raises the question of what's best for children. Just because it's possible to conceive a child outside of the relationship of a married mother and father, doesn't mean it's best for the child.' Do you want to respond to that?"

Cheney: "I'm delighted -- I'm delighted I'm about to have a sixth grandchild, Wolf, and obviously think the world of both of my daughters and all of my grandchildren. And I think, frankly, you're out of line with that question.". . .

Questions: If the VP is "delighted" about having another grandchild, and if he thinks "the world" of both his daughters, including Mary, why doesn't he answer Blitzer's question?

Does the VP think it wise to allow children and grandchildren to be purposely conceived and raised in structurally dysfunctional human arrangements that violate the Creator's norms for family life?

Or was Blitzer's question out of line?

Nadia Eweida at "Price of Freedom" 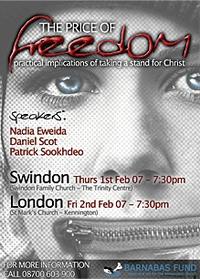 On January 20, The Pearcey Report noted that British Airways had dropped its ban on allowing employees to publicly wear cross necklaces at work.

At the center of the controversy has been Brit Air check-in worker Nadia Eweida.

Now comes an announcement that she will be speaking at two "Price of Freedom" events in England -- in Swindon February 1 and in London February 2.

For more information, visit the website of Inspire magazine.