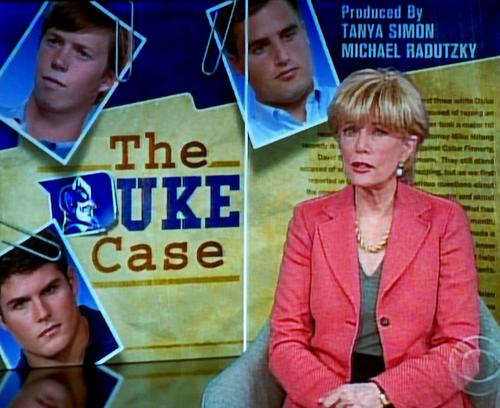 * 1 Accuser: "The only evidence against the lacrosse players is the testimony of the accuser, who was inebriated at the time of the alleged assault, and who has changed her story in significant ways on multiple occasions."

* DNA 5: "DNA from five men was found on the accuser, but none of it belonged to the three defendants. Mr. Nifong knew this before he indicted the trio.". . .

* Black & White: "The case has drawn national attention because the accuser is black, and the accused are white males."

* Money & Power: "Mr. Nifong's reason for pursuing such a flimsy case seems clear. The electorate in Durham is more than 40 percent black. At the time the accuser made her accusation, he was trailing in the Democratic primary to a woman he once had fired. If he lost, it was unlikely the winner would keep him on, and his pension has not vested."

* Agony of Victory: "Mr. Nifong won the election. But short term gain likely will be followed by long term pain. Last week he bowed to pressure to recuse himself. He faces a hearing before the North Carolina bar association that could result in his disbarment." . . .

* Why the Rush? "Liberals rushed to condemn the Duke lacrosse players because they loved the narrative: rich white guys abuse poor black woman."

* Reverse, Full Speed: "Some furious backtracking is taking place as evidence of their innocence mounts. A new verb, to 'nifong,' has been coined. It's a synonym for 'to frame.'"