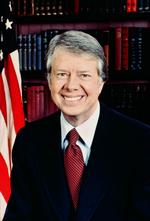 * Carter's Letter: "Neal Sher, a veteran of the U.S. Justice Department’s Office of Special Investigation, described a letter he received from Carter in 1987 in an interview with Israel National Radio’s Tovia Singer. The letter, written and signed by Carter, asked that Sher show 'special consideration' for a man proven to have murdered Jews in the Mauthausen death camp in Austria." . . .

* Carter's Book: "Now, following Carter’s book, Palestine: Peace Not Apartheid, Sher has decided to go public with the hope that a public made aware of Carter’s support and defense of a Nazi SS man will help illustrate why the arbiter of the Camp David Accords came out with a book defending the Palestinians after the landslide election of the Islamist Hamas terror group."

* Carter's Heart: “'It always bothered me, but I didn’t go public with it until recently, when he wrote this book and let it spill out where his sentiments really lie,' Sher said. 'Here was Jimmy Carter jumping in on behalf of someone who did not deserve in any way, shape or form special consideration. And the things he has now said about the Jewish lobby really exposes where his heart really lies.'”

The entire news report is here.

Related:
Dershowitz to Rebute Carter Speech at Brandeis
14 Carter Center Advisers Resign Over Book
Many Who Condemn Holocaust-Denial Help Pave the Way
Fascism Is Back