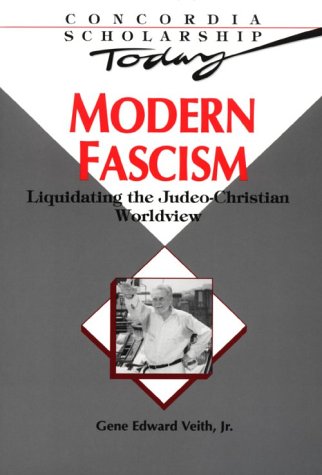 "Fascism is back," Gene Edward Veith tell us in Modern Fascism: Liquidating the Judeo-Christian Worldview. But the daily news makes this clear as well, with among other items, reports of a Holocaust-denying conference held under the auspices of an anti-Semitic government that says Israel should cease to exist.

Fascism "refuses to go away," says Veith. "Fifty years after World War II, it keeps intruding upon our attention in odd facts and disturbing news. . . .

"The lunatic fringe, of course, is always with us, but we are also being confronted by signs of fascism as a larger social movement. . . .

"The implosion of communism was a great victory for democracy, but the vacuum has been filled by an intense, violent ethnic nationalism and the revival of overt fascist movements that had been suppressed since World War II but are still very much alive. . . .

"Unsettling cultural trends are intensifying throughout the West: cynicism about democracy; a yearning for charismatic leadership; economic disaffection; moral skepticism; a cultural irrationalism that breaks out in acts of inexplicable violence."

Fascism Back in . . .
* Academic Circles: "Fascism is back in academia. A recent biography of the existentialist sage Martin Heidegger has uncovered his extensive involvement in the Nazi party. . .

"Far more disturbing . . . is the ideology that is coalescing . . . in today's intellectual establishment. Cultural determinism; the reduction of all social relationships to issues of sheer power; the idea the one's identity is centered in one's ethnicity or race; the rejection of the concept of the individual -- such ideas have become academic commonplaces.

"The project in contemporary thought of dismantling Western civilization and critiquing 'humanistic values' (such as liberty, reason, and objective moral principles) is not new. All of the ideas are direct echoes of the fascist theories of the 1930s."

* Pop Culture: "The popular culture is the most fertile breeding ground for fascism."

* Mass Politics: "Instead of rational analysis of issues and reasoned debate, our political discourse turns on image manipulation through or mass media. . . . This was Goebbels' dream."

* Morality: "Moral issues are today almost impossible to discuss in objective terms. . . . Morality is reduced to social utility or the assertion of the will. This was precisely the Nazi ethic."

What Is Fascism?
"Only five decades ago, the world was in the nightmare of war and Holocaust. We seem to have forgotten everything. Putting aside images of goose-stepping villains from the movies, does anyone remember exactly what the fascists believed?"

"We must know what fascism is so that we can recognize it when we see it. . . . Racism alone cannot explain the virulence of Nazi anti-Semitism. . . .

"The fascists aligned themselves not only against the Jews but against what the Jews contributed to Western civilization. A transcendent God, who reveals a transcendent moral law, was anathema to fascists. . . .

"Fascism was essentially a spiritual movement. It was a revolt against the Judeo-Christian tradition, that is to say, against the Bible.

"Some fascists believe that Christianity could be purged of its Jewish elements; other believed it should be completely replaced. Some advocated a syncretistic Christianity, revising the faith to make it accord with the new culture. . . .

"The fascist rebellion against transcendence restored the ancient pagan consciousness. With it came barbarism, a barbarism armed with modern technology and intellectual sophistication.

"The liquidation of the transcendent moral law and 'Jewish' conscience allowed the resurgence of the most primitive and destructive emotions."

Veith's book is as relevant today as when it was first published, in 1993.

It was a Holocaust conference not Holocaust denial conference although admittedly it was rejected by many on methodological or scholarly grounds.

Fascism as increasing authoritarianism at the expense of human rights does appear on the rise but which nations seem to be so sliding?

Is the author concerned about the increasingly authoritarian nature of U.S. political power? Or of the fascist like brutality of the Israelis against the Palestinians?

Fascism is about managing the people with as little regard for their human rights as is possible to accomplish at any given time. Hence "creeping fascism", policy by policy, executive order by executive order or by by-passing the constitution etc..

Potentially interesting book depending on how honestly and deeply it delves into the fascist or fascist-like means of governing going on in the west as much as anywhere at present.