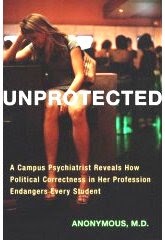 I just ordered it from my local bookstore. Thanks.

How is it that we allow PC values to become the dominant values in institutions throughout the USA? It appears as if they are not the values of choice among the great masses of Americans yet those who push for them seem to have power that is disproportionate to their numbers.

Its all about testing the wind, I'd say.

The other day I talked with my husband about a similar question concerning homosexual behavior and AIDS. No one wants to grab the facts in their hands and tell the truth for fear of "offending" or "moralizing" behavior, yet, do we not do this unabashedly to smokers (for example)? We urge them not to smoke, we applaud them for quitting, we ridicule and and even file suit against advertisers for marketing this "evil" or "dirty, dangerous habit" to children, no doubt, and now we are entering into private homes of civilians screaming "child abuse due to second hand smoke." Why do we (should we?) approve of this outcry, based on HEALTH FINDINGS-empirical evidence-and not say the same for the obvious health issues surrounding the gay lifestyle, and others including those mentioned in the anonymous author.

Anyway, just table talk at our house in NC...